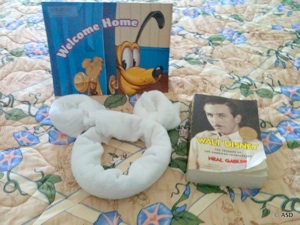 As always, on New Year’s Eve, Epcot showed Illuminations twice — once fairly early for the “little ones” and again at 11:40 p.m., with a tag that leads up to the huge display leading up to and after Midnight. Fireworks were shot from behind many of the country pavilions in the order the countries had already celebrated the start of the New Year. After New Year’s Eve and January 1, 2010, the temperature dropped into the 30s and 40s and did not get much higher for that for the rest of the trip. That meant less time in the parks, and, therefore, fewer photos and less video.

This trip marked the first time I used Disney’s Magical Express bus service to and from Orlando International. Rental car rates for the last few days of 2009 discouraged me from renting a car for the length of the trip (which had been the norm for years) — in particular, the best total rates out there were above the neighborhood of $800 with all of the taxes and fees tacked on (more than double the average over the years). To get food at a local Walmart for this trip involved a three-day rental car starting on New Year’s day, picking up and returning the car to The Walt Disney World Dolphin, a nice walk from Disney’s Beach Club Villas.