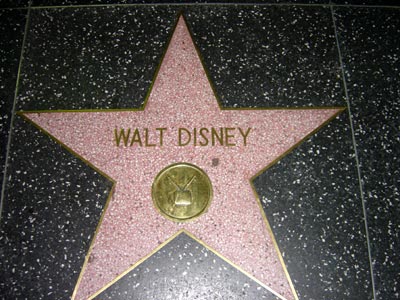 Not surprisingly, there are a number of Disney “places” around Los Angeles, these are photos of a few them.

With the interior designed by Walt Disney Imagineering, the theme of Encounter Restaurant is a 1990s take on the 1960s. The Menu is pricey and the location is difficult to get to from the LAX terminals (especially with your luggage). But, with what turned out to be a 6 hour layover at LAX on August 3, 2001, I found the food to be better than average and the atmosphere pretty nice for a restaurant at an airport. Little did I know then that a few weeks later I’d be back at LAX in a changed world with National Guard units at the airport. (See My September 11 Story.)

In 2001 and 2002, you may have noticed that the interior was used in a retro Dockers pants TV commercial (it was the one with the high-tech gadgets and x-ray specs).