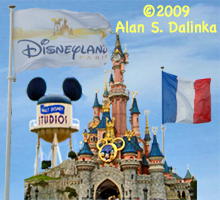 On November 22, 2009, I checked out of my hotel in Paris, France near the Eiffel Tower and took the 45 minute RER commuter train about 20 miles to the east of Paris to the Marne-la-Vallée-Chessy Rail Station at the Disneyland Paris Resort. As of this trip, the Resort included two theme parks: Parc Disneyland (1992) and Walt Disney Studios (2002); seven hotels and the Disney Village entertainment district. The Rail Station is located between the Theme Parks and the Disney Village. At the end of my visit on November 24, 2009, I departed from the Rail Station via a EUROSTAR train with direct service through the Chunnel to St. Pancras International Railway Station in London, England.