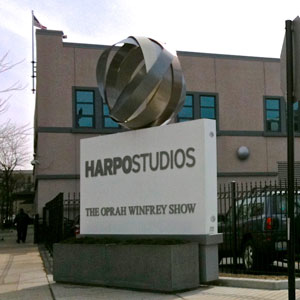 March 31, 2011
“Hollywood” in Chicago. Chicago was home to one of Charlie Chaplin’s first movie studios, Essanay Studios, at the dawn of the 20th Century, and as the 20th Century closed and the 21st Century began, it was home to Oprah Winfrey’s powerhouse talk show and her Harpo Studios. ABC, CBS, NBC and Fox own their Chicago affiliates. And Chicago is also home to “Superstation” WGN-TV.

One of the first studios where Charlie Chaplin made movies in the early 20th Century, the Essanay Studios building in Chicago's Uptown neighborhood is now part of St. Augustine's College.