ASD Posted on December 24, 2012 Posted in Other Disney Places Tagged with Photos, Video 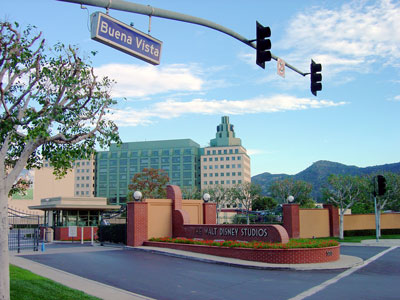 The Walt Disney Company’s studios and headquarters are located at 500 South Buena Vista Street, Burbank, California. There’s quite a bit to see from the three main public streets that surround the lot: Riverside, Alameda and, of course, Buena Vista Street.

The Walt Disney Company’s studios and headquarters are located at 500 South Buena Vista Street, Burbank, California. It’s just down Alameda from NBC and Warner Bros., and you can see Disney Studios from Universal Studios Hollywood (when the smog isn’t too thick).

Note, the one picture of the HQ building taken from near the “Guard Shack” on the Lot, just inside the archway on Alameda was taken with the permission of the guards.

Jump to the photo from Universal Studios on a non-smoggy October 31, 2004.

November 5, 2000
The video includes a brief clip of the original Disney Store at Glendale Galleria.

As you can see in the composite photo below,
NBC Studios is at Alameda and Bob Hope. 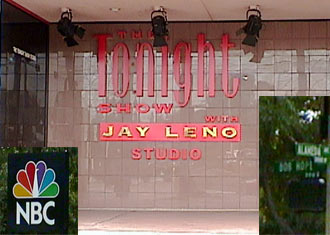 You can also see more Burbank and Hollywood photos.