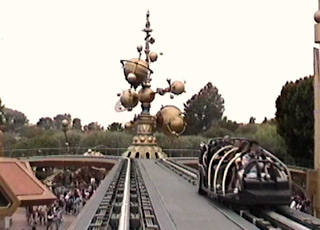 Excerpts of the Great Moments With Mr. Lincoln show at Disneyland from the time before the show switched to in-the-dark 3D sound with headphones and before it was removed to host the 50th Anniversary Movie starring Steve Martin (2005 to 2008). By the end of 2009, a new version of the Mr. Lincoln show opened and you can read about that elsewhere on the internet.

Highlights of the nighttime version of The Mulan Parade at Disneyland. Videotaped at the It's A Small World parade viewing area at dusk and just before the Fireworks.

Disney's California Adventure is under construction as part of Disney's effort to transform Disneyland into the Disneyland Resort in 2001. A platform was constructed in what became the esplanade to view the construction site in the former Disneyland parking lot.