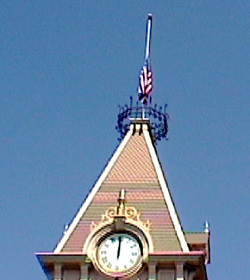 Like many Americans, I was far from home at the time of the attack on America.

I flew from Chicago to LAX late in the evening on Monday, September 10, 2001, for a business meeting scheduled for Tuesday morning. I drove to Costa Mesa, California in Orange County where I stayed in a hotel. I woke up Tuesday morning to see on TV the World Trade Center on fire and watched the collapse live on TV.

Much to my surprise, my business meeting proceeded on Tuesday (it was, after all, a court-ordered settlement conference) and we gathered around a 2 inch TV during breaks to see the news. At the end of the day Tuesday, I was left — like thousands of others — devastated and more than 1700 miles from home.

I heard on the news Wednesday morning that Disneyland and Disney’s California Adventure had re-opened. Having no way to return home, no real way of getting back to work, and no strength to watch the replays on TV over and over again, I headed off to the parks on Wednesday and Thursday. I almost always travel with my camera, whether it’s a trip for business or personal, so I have photos and video from the parks from these two days. I’ve posted some of the photos and video.

To the folks at the hotel, the rental car company and the airline, thanks for taking care of me during this week. I flew back to Chicago safely on one of those few flights departing LAX on Friday, September 14, 2001, and returned home just before midnight.

To the people directly touched by Tuesday’s tragic events, the families and friends of those who were the victims of this brutal attack, my thoughts and prayers.

America shall continue to thrive.